I had the distinct pleasure of working with Abbie lately on a series of Mylar reflections. These images, like a lot of my work, might come across as grotesque. But this is nothing new in art! Depictions of catholic saints commonly depicted their trials and sufferings in gruesome detail. My mother tells of a statue at her childhood church honoring Saint Lucy, who was martyred by having her eyes plucked out. The statue had dark holes for eyes and she held a platter with a cloth covering it- out from underneath peaked her eyes. (The fact that this statue had been hidden away up in the choir loft no doubt added to the creepy nature of it!) Most folks today would find such a thing utterly gruesome, but in its time the statue communicated a story in a way that was much safer to experience than seeing the actual event.

This image with Abbie speaks to me of the damage that social media, and our obsession with fleeting images, does on a daily basis. Contemplation, nuance and just plain old boredom seem to be dead, and we are the poorer as a society for it. (That said, I’ll likely put an edited version of this image up on Instagram to get it out there.) Shooting these kind of images in digital takes me into a flow state where I see and react, but without conscious thought or design. It is distinctly different compared to the wet plate work. Not better or worse, just different. Both provide a semi-meditative working state, and in both I often do not fully appreciate the results until much later after reflection.

New Paths: Wetplate Collodion and Beyond 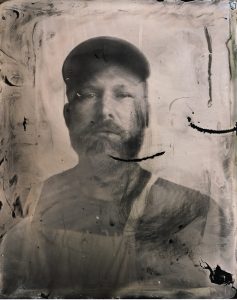 So there is a good reason why there are so few selfies from the wet plate collodion era! Somehow, I managed to do muck up just about everything here, including tearing the emulsion. Yet it still looks interesting to me!

END_OF_DOCUMENT_TOKEN_TO_BE_REPLACED

It might seem that I have taken a break from the metal mirror work, what with all of the large format film work I’ve been posting lately.  But that is definitely not the case! END_OF_DOCUMENT_TOKEN_TO_BE_REPLACED

Another from the other night with Mara.  In these photographs I’m using polished sheets of aluminum.

END_OF_DOCUMENT_TOKEN_TO_BE_REPLACED

Let’s see, this weekend I managed to:

Monday has a lot to live up to if it wants to top this!

Lucas James is a fine art photographer in Manchester, NH.

Self Image, Photography and Identity in the Digital Era

Ever wonder why seeing yourself in a photo or on video can be an uncomfortable experience?  Or why hearing your own voice played back sounds “weird”?  Much of it has to do with our formed self image.  Each of us has a mental self image that we have constructed over time.  We base that self image upon the information received every day.  Our brain forms an idea of “what do I look like?” from daily visual data, which for most us is what we seen in the mirror.  Think about how many times per day you see yourself in a mirror.  That repetitive data input is what your brain bases its self image upon, but that image is reversed from reality.  So when you see a picture of yourself- un-reversed- it can look odd.  Our brain knows it’s us, but something is not quite right.  The same is true for hearing your own voice.  How you think your voice sounds is based upon the resonance through the bones in your skull so when it is played back to you without that resonance, things sound odd.

So what does this have to do with the digital era?   Well, if you hadn’t noticed there is an entire generation of people who grew up with camera phones in hand and for whom snapping a “selfie” is a daily (if not hourly!) ritual.  Clearly this generation is already more comfortable with the self portrait!  At the same time, those images can be easily manipulated at whim.  So the question I have is how that affects the formation of self image?  Not how it affects self confidence, as has been recently postulated, but how does the constant exposure to self portraits and digitally manipulated images change the recognition of self?  Does it expand it from what is to a larger conception of what could be?  Or does it make self recognition more difficult?

As a scientist these questions fascinate me, but I am not set up to answer them.  That work will have to be left to others.  But as an artist, it is something I am exploring in great depth.  I’ll talk about it at length when I write about the “Mirror Series” and how it came about.

Education and the Studio of Photographic Arts

My photographic education to date has been, to say the least, informal.  I picked up a camera in high school back in the 80’s.  I learned the basics of technique and exposure from books, magazines and experimenting.  I got lucky in my junior year- my buddy John’s dad had an awesome dark room and we spent hours in there working up film and print.  During college and grad school photography was a some-times hobby.  I took lots of slides on vacations and hiking trips, but never just as an art in itself.  When digital came around, I avoided it mostly because I didn’t understand things like white balance.  But I did buy an Canon point and shoot and had a lot of fun with it.  Then about five years ago I decided to buy a dSLR and lean how to use the thing.  In the course of putzing around with it I found David Hobby’s site (aka the Strobist) and it opened a whole new world for me!  I bought a couple of flashes and started playing around, mostly replicating David’s online lessons.  That was all well and good, but I needed some hands on instruction.  I was searching online for a rental darkroom when I stumbled across the Studio of Photographic Arts (www.thesopha.com).  And that’s when everything changed!

Studio C at the SOPHA

The SOPHA is a 8,000 membership based studio in Manchester, NH.  They offer three rental studios, multiple pre-built sets, tons of props and other resources.  More importantly, they offer classes in everything from Beginning Studio Lighting to Business for photographers to Building a WordPress Site.  The place is run by Bud Thorpe and he has managed to build a dynamic community of photographers.  In fact, it’s that community that makes being a member of the SOPHA so worthwhile.

The hands on guidance there from Bud and Dave Dawson and the rest of the community helped move my work and vision to a new level.  Plus having access to a ton of gear and new techniques to play with helped accelerate things!  Most of my studio images on this site were shot at the SOPHA.  If you happen to be in Manchester, NH drop by and check them out!

Also posted in Education, The SOPHA

Howdy.  You’ve found the site for Anisotropic Images.  My name is Luke and I’m an amateur photographer based out of Manchester, NH.  My focus is on the fine art nude and abstract imagery.  I use the nude as a subject because (if you’ll excuse the pun) it strips away the extraneous elements of our existence, leaving a maleable and open form.  I find inspiration in dreams, especially those that occur just as I am waking or falling off to sleep as well as simple patterns of light and shadow.

Anisotropic Images?  Quite a mouth full, I know.  Anisotropy is defined as the property of being directionally dependent, as opposed to isotropy which implies random properties in all  or multiple directions (see the Wikipedia definition).  Anisotropy describes qualities such as light coming through a polarizer or materials that have a directional grain such as wood.  It also is a connection to my professional life as it is utilized in the analysis of unknown molecules.